The "Fine and Rare" section of this blog is a space in which I will periodically show off some of the "gems" from my personal collections. Not necessarily "valuable," but certainly unusual. 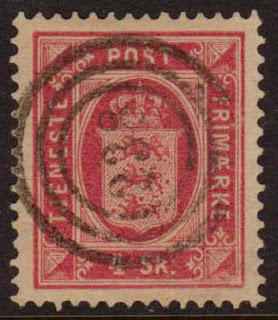 Found this stamp in an APS Circuit sales book, some years ago. It turned out to be a "double bargain."

For starters, it was just a beautiful stamp with great eye appeal. But I noticed that it was actually the scarcer 4 skilling official, misidentified as the much more common 8 øre value, issued in 1875. These early Officials are not so easy to find, in perfect condition, so I was happy... and the nice centrally placed numeral cancel was just a bonus.

A little further research revealed that the numeral cancel "238" was assigned to the post office at Thorshavn in the Faroe Islands. This is actually one of the rarest of the numeral cancels used in Denmark, and to have it on a stamp in perfect condition only adds to the value. So this "common" stamp-- at first glance-- actually became one of my "gems."

The 1995 AFA Specialkatalog has a section listing Faroese cancels on Danish stamps, and it values the "238" numeral cancel on a single stamp at 4500,- Danish kroner-- the equivalent of about US$870.00.
Posted by Peter M at 10:09 No comments: