For me, a large part of the joy of stamp collecting comes from finding "unexpected treasures" in a lot of stamps.

Sure, we can go out and find a stamp dealer, or go to an online stamp store, and buy precisely the one stamp we need to fill a very specific space in the album. And I won't deny that this may be the most appropriate way to collect, for many people.

For me? Not so much.

Most of my collection has been built through buying fairly large lots, collections or accumulations... and slowly sifting through the "mess" to find the few "gold nuggets" I wanted to include in my collections. Sure, I do end up with quite a bit of duplicate material... but there are ways of trading or selling that to other collectors who may need what I don't need.

Recently, I splurged and bought a fairly large lot of classic used back-of-the-book issues from Sweden. Well, for me it was fairly large outlay-- about US $375.00, from a stamp auction firm in Denmark.

Buying these classic issues-- most from the period 1874 to about 1900-- is always a bit risky, especially if you can't be present to check the condition. The Swedish "Long" officials (Scott O1-25, Facit TJ1-24) are especially notorious for poor condition-- thins and tears are common, and most stamps are somewhat to extremely off-center. Often the cancels-- especially on the higher values, which were used on parcel cards-- are heavy and unattractive, and will have bled through to the back of the stamp. Collecting a set in VF+ sound condition can be quite challenging... and many collectors just give up on such a proposition, settling for a "reasonable" in Fine or better condition.

As expected, condition was somewhat "mixed." That's typically "dealer speak" for "all the better values are damaged, the cheap stamps are mostly OK." After sorting through the lot, almost 50% of the stamps ended up in my "junk pile" because they were damaged/faulty to some degree. However, there were also some very nice stamps-- with very attractive cancels, one of my specialties-- in the lot.

The "upside surprise," however was that the very best stamp in the lot was also the one with the highest catalogue value:

The pictured stamp is a near-flawless copy of the Sweden 50 öre "long" official, perfed 14, from 1874, Scott no. O10. Not only does it have almost perfect centering, it is very fresh and bright, it has full perfs and no back faults, and a lovely upright town cancel from the village of Fröskog-- a smaller, hard-to-find place. There is a faint hint of a pencil line in the upper right corner, but otherwise it's as close to perfect as they get. This is a difficult stamp to find in merely "sound" condition... but in "gem" condition like this, it an extreme rarity. If I were to try to purchase this stamp individually at a stamp auction, in this condition, chances are I would have to pay well in excess of the $125.00 stated catalogue value.

Needless to say, I was very pleased with the outcome of this purchase, and I am still left with lots of trading and approval book material. Which just goes to show that it's not always the highest value stamps that are in the most "mixed" condition!
Posted by Peter M at 21:26 No comments:

This probably sounds a little strange for someone who's often going on and on about how we must try to bring new collectors into the hobby. Well, let me assure you that the title is not what it seems. So, let me explain what brought those words to mind. 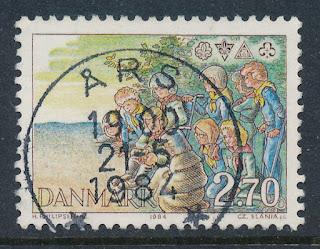 I collect postally used stamps. My personal philosophy is that I like to have a collection of stamps that have "done" what stamps were designed to do: Carry the mail. For me, there is a certain charm and interest added by being able to look at a stamp and know that it carried some letter-- anything from a wedding invitation to a payment for a credit card bill-- from "Point A" to "Point B."

In fact, this part of philately/stamp collecting is so important to me that several of my collections are centered not just around the stamps, themselves, but around the postmarks on the stamps.

The collection I currently consider my "primary" is of town cancels on classic Sweden-- only on the issues of Scott/Facit nr. 1-51.

My broader Denmark specialized collection does consist of "one of each" but is also supplemented not merely with varieties and plate flaws, but also with what I think of as "luxury" cancels on all issues. In the US, collectors typically called them "Socked-on-the-nose" (S.O.N.). 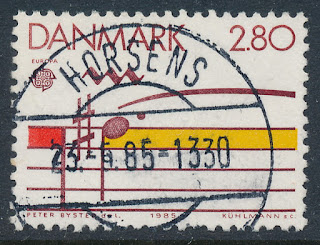 So what's the issue?

As mail service-- and the way we communicate-- has entered the technological age, not only are we seeing fewer and fewer letters with stamps, but the way "snail" mail is being processed is increasingly automated.

What does that mean, in a practical sense? Well, local post offices stopped "handling" mail, and would simply bag incoming mail and send it-- by van or by train-- to central sorting facilities, where the postmarks would be applied. However, instead of 100's (or even 1000's) of different towns, Denmark ended up with just a handful of the postmarks of central sorting facilities. 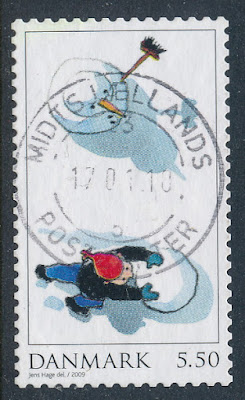 The photo to the left shows a typical "modern" Danish cancel. It is certainly a "nice" one, and would fit my old qualifications for a "luxury" town cancel... except for the small detail that there is no longer a town involved. The cancel-- from 2010--reads (translated) "Central Sjælland's Postal Center." There is now just one standard postal marking for a region with 100's of towns and villages, and a population of some 300,000 people.

To me, that's just not very interesting. And that's why I realized that I "stopped collecting" around 1985, when town cancels started to go away.

Of course, I haven't actually stopped collecting. 1985 just became my "cutoff point," after which I no longer look for luxury cancels on newer issues.

Of course, this particular "issue" is not unique to Denmark. Other countries around the world are increasingly automating their mail delivery systems, and town cancels everywhere are becoming a thing of the past. In some places, cancels (as applied by a canceling device) have completely gone away, to be replaced by rather unattractive ink-jet "spray on" cancels.

Of course, many postal administrations still allow collectors to bring in their stamps to be hand cancelled by a postal worker at the post office. But whereas I can certainly appreciate the "extra effort" to keep stamp collectors happy, I must confess that I am a bit of a "purist:" Such cancellations-- while certainly "genuine" in all respects-- just do not fit my idea of "postally used."

Ultimately, I can't say that I blame the postal services of the world for "getting with the times." Everyone has to carefully watch where the money goes-- and in saving money, speed and technological advances often becomes a very important factor.

That said, it still makes me sad to realize that my stamp collections have become somewhat "finite;" that is, the possibility of ongoing expansion has gone away.
Posted by Peter M at 12:10 1 comment:

Swedish Stamp Auction firm Postiljonen has announced that the online catalogue for their fall 2011 stamp auction is now online. Postiljonen is one of Europe's well known-- and quite prestigious-- large stamp auction firms. This year's fall auction will take place at the Hotel Savoy in Malmö, Sweden, on September 30th and October 1st, 2011.

Although this is a "brick-and-mortar" auction, the richly illustrated online catalogue makes it possible for collectors all around the world to participate-- and email bids are accepted.

A quick looks through the catalogue shows the firm's typical strong selection of high quality classic Scandinavian stamps-- including both superb individual items, as well as large exhibition quality collections. Not for the faint of heart, the lowest priced lots generally have an estimate of 100 Euro (about US $140), with opening bids running to the thousands.

One highlight (click on image to see a larger version) is this superb classic cover  from Sweden, described in the catalogue as: "An exceptional 3-colour franking to the Papal States with 3, 4 and 24 Sk. Bco in very strong colours and with extremely clear excellent cancellations "STOCKHOLM 15.9 1857". Transit and arr. pmks on back together with an official figure handstamp by the Consulate of the Papal States in Stockholm. Cert. Obermüller Wilén. SUPERB EXHIBITION ITEM OF HIGHEST RANK. Provenance: Hans Mott Hugo Josefsson, Grand Prix STOCKHOLMIA 86."

You can use the following link to visit the Postiljonen Auctions online catalogue and have a look at the offerings in the fall auction.