Although widely considered to be "number 2" in many parts of the world, Denmark's 4RBS brown has always been regarded as "Denmark's first stamp" by collectors in Denmark. It was issued to cover prepayment of the ordinary letter rate within Denmark.

In the Danish AFA catalogue, the 4RBS is listed as no. 1, and was issued on April 1, 1852, a month before the 2 RBS blue-- which is recognized as no. 2 in Denmark, but no. 1 in some parts of the world. It's a bit confusing-- but I personally believe the Danish approach is the most appropriate one, since these two stamps were definitely not issued as "a set," so treating them as if they "belong together" is incorrect.

The 4 RBS stamp is widely collected by specialists, and offers up a wealth of printings, colors and plate flaws. Even though it is a "number one" stamp from the 1850's, it remains reasonably affordable, with a catalogue value in the range of US$40.00 and up depending on the printing and color.

Over 15 million copies were originally printed-- across different printings-- so quite a few are still around. Collectible quality copies (maybe with 3 margins, or some tiny flaw) can generally be had for about US$10.00, although premium quality 4-margin copies sell for considerably more.

One of the major varieties on this stamp is known as the "Pemberton Double Strike" stamp, named after the philatelist who first identified it, many years ago.

The stamp is found only on plate I, position 19, and has a very visible splitting of the frame line at right, as well as a double frame line at left, and lots of "double strikes" in the wreath at bottom right.

The photo at left shows the double frame line at left (over the word "KONGELIGT") as well as the thickening/doubling of the right frame line, starting at the upper right corner.

Although this is a fairly scarce variety, copies can be found almost anywhere-- my own example came from an APS Sales Division circuit book-- which goes to show that it's always a good idea to take a closer look at stamps-- even those that are quite familiar to you!
Posted by Peter M at 11:21 No comments:

Regular readers of these pages will know that I am not only passionate about philately... I am also passionate about "spreading the word" about stamp collection to people not currently involved with the hobby. I strongly believe that one of the ways we'll keep the stamp collecting hobby going for many years to come is to reach out to those who don't currently collect... simply relying on "former" collectors and parents passing collections to their children is not enough. 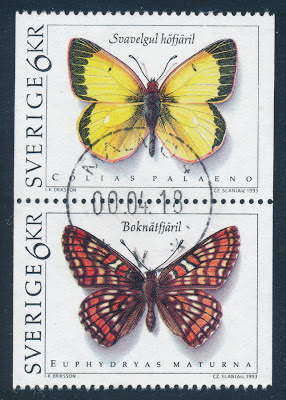 Part of what I do for a living is write-- although I haven't written much about stamps, aside from this blog. Recently, I've gotten more interested in the idea of writing "general" stamp articles in an attempt to reach the NON-philatelic press.

The first (hopefully of many!) article was recently finished and has now been posted to a web site I sometimes use to "test publish" new articles. It's a "sand box" of sorts, where I can post articles, invite people to go read them, then fine tune them and get feedback, while having them out there in "public view." If the response is positive-- after revisions have been done-- maybe the article will be "publication worthy."

As of this writing, a couple of editors I work with (on material that has NOTHING to do with stamps) have expressed some preliminary interest.

This first article in somewhat broad strokes covers how stamps came about, followed by a little bit of the history and evolution of stamp collecting, from the 1850's to the present day. It's fairly "light and fluffy," but there's only so much you can say in an "article length" piece. Of course, this is not written for the existing stamp collector, but for the casual reader marginally familiar with the idea that "people collect stamps," or possibly someone who collected stamps as a child and might feel inspired to pull out their old collection from the back of the closet.

Stamp Collecting: The Rise & Fall... and Rebirth of the World's Greatest Hobby

Naturally, any comments and feedback on the article are invited and welcomed. This is just ONE approach-- my hope is to write a whole group of "introductory" articles about different aspects of (introductory) philately-- and with a bit of luck get one or two published in non-philatelic magazines.
Posted by Peter M at 23:32 2 comments: