The "Fine and Rare" pages of this blog is a space where I sometimes share some of the "gems" (in my opinion) and favorites from my personal collections. Some will be rare, some will just be of exceptional quality, some will merely be unusual-- a few will be "all of the above." 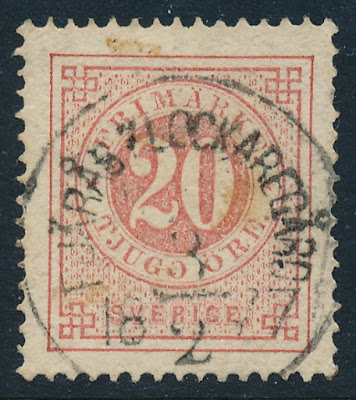 One of my primary specialized collections is of town cancels on classic Swedish stamps, namely the "Arms" and "Circle" types, issued between 1855 and about 1891. In Sweden, these stamp series are known as "Vapentyp" and "Ringtyp," respectively. I originally got interested in this area of collecting after purchasing an old accumulation from a dealer in Copenhagen, Denmark-- and noticing how attractive many early Swedish cancels were.

Cancel collecting is a "big deal" in Swedish philately. Collecting Ortstämplar (town/place cancels) is part of a popular trend known as "hembygdsfilateli" (literally "home municipality philately"), where collectors specialize in the postal history of a specific town, county or region of Sweden... typically the area where they grew up, or where their ancestors came from.

This stamp came to me some 15 years ago as part of a very disappointing mail auction lot, described as a "very fine specialized group of classic Sweden," which in fact was a group of primarily "awful spacefillers." This stamp was one of the better ones, VF and with just one nibbed perf-- still, no great rarity... until I looked up the postmark.

Fjärås Klockaregård was no more than a tiny "place," not far from the town of Kungsbacka in Halland, Sweden. Mail was only handled there from the beginning of 1874 till around March of 1877. As you can probably imagine, if you take a place with perhaps 100 people, in the 1870s, and a postal depot only open for a little over three years... you end up with very few surviving postmarks.

This became the first truly rare postmark in my Swedish cancel collection. I sent it off to Sweden for certification, and it came back with a clean "genuine" certificate.