To be specific, I collect postally used stamps. No CTO's for this boy... and I don't care, even, if said CTO's are from a "good" country. 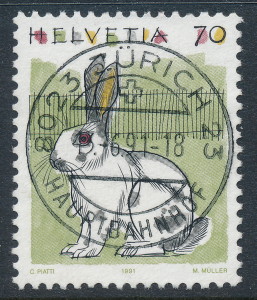 When I was little, my father tried to get me interested in collecting mint stamps. The points he made was that (A) when you have a mint stamp, you can see the whole design, and (B) there are going to be far more used stamps than mint stamps-- in the long run-- so mint will be more valuable.

I did try-- briefly-- to collect mint stamps from France, but it "annoyed" me because I had to be so careful when putting them into my album. Besides, I just like used stamps-- to me, they are stamps that have done what "they are supposed to do:" they have carried a piece of mail from one point to another.

Whereas I don't spend too much time waxing philosophical about the "romantic" nature of a stamp's journey from one place to another, I do like used stamps for one simple reason: collecting postmarks allows collectors to form inexpensive collections... AND if you decide to collect town cancels, you can form a pretty extensive collection without ever having to spend more than a few cents a stamp. Well... for the most part.

It does sadden me a little that collecting used stamps is getting harder and harder to do. In days gone by, I could go to the local post office, make my way to the area with banks and banks of P.O.Boxes, and on any given day retrieve 15-50 perfectly good used stamps (and sometimes covers) from the garbage cans. Nowadays? Not so much. In fact, it's a rarity that commercial mail (of the kind that gets thrown away at the post office) is franked with stamps. 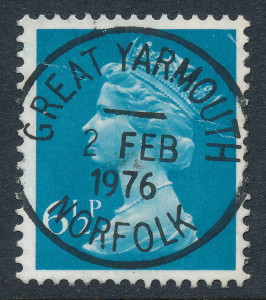 Collecting postally used stamps has also gotten more difficult on account of the proliferation of self-adhesive stamps. Never mind what different postal administrations might tell you, self-adhesives are more difficult to soak off paper... and a greater proportion of them get damaged during soaking... Some issues are all but impossible to get off paper in one piece, and some countries (like the UK) now issues stamps with built-in "security features" that adds to the difficulty of removing the stamp from the envelope.

These difficulties aside, I will continue to collect postally used stamps, and especially those with interesting and really nice postmarks. I will continue to buy kiloware from different parts of the world, as long as a supply exists. It may be true that newer postally used stamps are getting more difficult to find, but in a sense that adds to the challenge of building a collection.

If all else fails, I may end up getting back to the boxes of old kiloware "I never quite got around to" soaking!
Posted by Peter M at 15:02 No comments: