Earlier this year, I had my 15th anniversary of being a member of eBay-- mostly buying and selling stamps.

Although the "greater Internet" reports their experiences with eBay to be very much a "mixed bag," I have to confess that at least 98% of my interactions on that site have been positive. I have added many great stamps to my collections I would never have had access to, were it not for eBay... and I have been able to sell off excess duplicates with ease and speed that's just not possible through other venues.

This morning I was clearing out some old image files on my computer... and came across a folder documenting one of the more bizarre (and not so good) experiences I had on eBay, as a seller.

I remember I was selling some Norwegian duplicate stamps from a collection I had bought. There was basically nothing "special" there, but quite a few stamps I expected would fetch about US $2-15 if listed for auction-- better than nothing, and I'd always rather free up the money to buy new stuff than have it sit on my shelf. 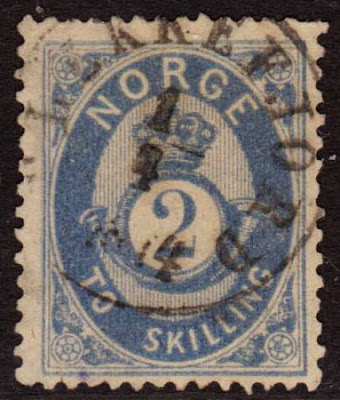 So I listed these 40-odd stamps from Norway, including a fairly unspectacular copy of the 2sk blue "Posthorn" from 1872. I was fairly pleased with it, however, because it had a "genuine" postmark, making its catalogue value in Facit 600:- Swedish Kr. or about US $90.00. The vast majority of these were canceled "late," after Norway switched from "skilling" to "kroner & øre," and the stamps canceled like that are worth far less.

Anyway, within a few days of listing, bidding on the stamp started "taking off."

Now, I write very clear descriptions on eBay, and always identify and cross reference my listings with the Scandinavian catalogue numbers (in this case, both Facit and NK), as well as the Scott number.

By the time the auction ended, the bidding had reached more than US $400.00-- a completely absurd price for such a stamp. Of course, it takes TWO people to create a high price on eBay... and I just figured there were a couple of specialists duking it out over some important plate flaw I know nothing about.

So I send the stamp to its new owner and presume all is well.

Ten days later, I suddenly notice I've gotten a negative feedback calling me a "fraud" and a "cheater" and he's going to get me "thrown off eBay" for misrepresenting material and "lying" in my descriptions. As it turns out, this person was VERY ANGRY because the stamp had turned out not to be the extremely rare "Prussian Blue" shade, worth 40,000:- Swedish Kr (over US $6,000).

OK, let's back up here. There was NO mention of this ever being a "rare variety." Not even a hint. Not even the vaguest suggestion of the possibility. And now this person takes it upon himself to blame ME for the stamp not being what he wanted it to be, rather than what I said it was... and wants to get my eBay account terminated for his error?

The thing that was baffling to me, of course, was that there had to be two bidders to get the price so high. Both of them had to "see" something to get the competition to heat up. It seemed the most likely explanation was that one collector "saw" a rare variety, and the other was a "copy cat" who didn't really know but figured the other bidder "knew something" and decided to blindly follow.

Stranger still, aside from the angry email and the negative feedback left, there was no further communication. I offered a return for a refund, but I never heard back.

Certainly one of the "stranger" eBay experiences I have had.
Posted by Peter M at 08:00 No comments:

Classic US Stamps on eBay

Occasionally, I will take a sidetrack from what I normally write about, here.

At the beginning of 2012, I first wrote about my stepdad's stamps (which I'd inherited) and about my efforts to slowly sell them off through eBay and other venues. You can see the original post here, if you're interested. You can also skip this story and go directly to looking at the stamps.

Anyway, the long and the short of it is that I have a couple of moving boxes with untold thousands of mostly older US stamps, generally in stock books, on random album pages and in glassines and regular envelopes.

I don't collect US, and never have had much interest. That also means I really don't really know anything much about US stamps... aside from what a somewhat advanced collector of areas can glean from looking in a Scott catalogue. Some stamps-- like the "bank notes" and "Washington-Franklins" are somewhat of a mystery to me... and I am really not prepared to spend days and weeks learning the finer nuances of these.

My stepdad did get a lot of enjoyment from his stamps... and even though he never really formed an actual "collection," his accumulating habits kept him busy in latter years.

For me, the "easy way out" would have been to hand all this off to an auctioneer or dealer (and I thought about it) and just take whatever offer I'd get. Based on my life-long experience with collecting and trading stamps, I expect I'd have been offered about $200-300 for it all, since this is very much what you might call a "job lot."

Maybe I'm just sentimental, or maybe I am following in the footsteps of my stepfather's tendency to be very "thrifty," so I decided to take on the "leg work" myself. Of course, it will take me several years to do all this... but that's OK.

I'm not going to go to a huge amount of trouble here-- just trying to skim off and offer the best to collectors. I expect there are no great rarities here, but there are certainly lots of "mid value" stamps-- from $1.00 to $50.00 in Scott (a few higher-- maybe to $150.00 CV)-- and some are actually in pretty nice (and even superb) condition. There are also thousands of cheapies, and thousands of damaged-- those will just be tossed into the "sorted" box.

In my original post about these stamps I wrote that I would turn everything into "penny auctions." That is, every lot-- regardless of quality or catalogue value-- will open on eBay at ONE CENT, and the market can decide what the stamps are worth. Risky? Maybe... but my experience has been that the stamp market is pretty "intelligent," and good quality material will achieve a fair price. It's the junk nobody bids on. And I'm only going to bother with the better quality material-- the junk I may sell "by the pound," at the end.

I'm not doing this with the purpose of "making money," as such... although I do have some secret ambitions to put all the proceeds into my grandson's college fund (he's three).

Anyway, this week I am offering up my second group from this old hoard (the first went up for sale in March of 2012), consisting of 81 lots with mostly USED older US. As I said earlier, starting price is ONE CENT for all lots, regardless of value.

Also-- if you're a fan of US stamps-- it might interest you to know that all these stamps were collected in Europe, and most have not been seen by any US specialists for maybe 50+ years. I really have NO idea what might lurk...

... and last, but not least, I am not using my usual "Scandinavian Stamp Specialist" seller ID, but my private account I use mostly to buy and sell non-stamp stuff from our attic. Anyway, hope you'll have a look!

The Uneasy Relationship of Stamp Collecting and the Internet

Over the past few years, I have been writing quite a bit about stamp collecting and its future... outside the confines of this blog.

Whereas there is little doubt that the Internet has changed the nature of stamps collecting, I am increasingly coming to the conclusion that the online environment has helped save-- and continues to help save-- our hobby. 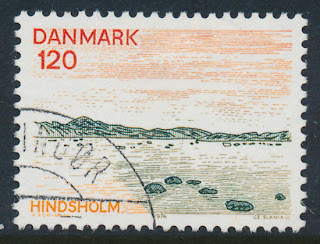 That said, I also see an interesting duality that has developed... a sort of rift between the "tech" and the "non-tech" stamp collectors of the world.

What do I mean by that?

Whereas there are many philatelists who have embraced the Internet as part of their collecting experience-- and actively use online stamp marketplaces and social media information to help build their collections-- there are also many who are still stuck in a "we don't NEED that" mindset.

Whereas I can appreciate we tend to adhere to the ways we are accustomed to, I can't help but think that stamp collectors who are not using (or "don't need") the Internet are going to end up going the way of typesetters and horse drawn carriages. Maybe that's just a "fact of life" but it makes me sad because these collectors have a wealth of knowledge to share with future generations of collectors.

The easy "argument" is that these collectors are primarily in their senior years, making them more resistant to embrace modern trends. In fact, I used to think that, myself... but on deeper examination, many of these folks who reject technology for stamp collecting are quite actively involved in online genealogy research and communities while using Flickr to share photos with their grandkids. So it's really not a "computer issue." Or an "age issue."

I have a twitter account... and a Facebook page... and a number of other online "presences." I belong to several online stamp collecting forums and communities. This morning, I was checking twitter and was once again just amazed by the low number of tweets relating to anything philatelic. The American Philatelic Society (APS) has 30,000+ members, but only 383 twitter followers. That's about one percent of the membership. What's silly about that is that I-- as an individual stamp collector-- have more twitter followers than the APS.

Maybe it's just "the nature of the beast." Stamp collectors tend to be solitary practitioners. They will often "join" things, but be non-participants. And maybe that is really the greatest challenge facing the stamp collecting hobby.
Posted by Peter M at 13:09 No comments: