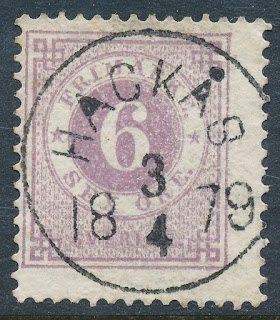 Pictured to the right is a copy of Sweden Facit nr. 31, the 6 öre lilac Ringtyp, perf 13, with a very nice cancel from the village of Hackås. The postmark is very crisp and clear, and reads "HACKÅS 3.4.1879." This is an example of the Swedish "normalcancellation 16;" in the small diameter with "thin" writing, typical of small postal places.

What is the value of this stamp? The stamp itself is a copy of Facit no. 31c which has a catalogue value of 45:- Swedish kr. A clear readable Hackås cancel from this time period carries a premium of another 50:- Swedish kr. The stamp is sound although a little off-center, but it is an unusually nice and clean example of the cancel. A stamp like this would probably sell for about 150-200:- Swedish kr. (about US$23.50-31.25) at auction; probably more from a specialist dealer.

About the village: Hackås is located in Jämtland county in central Sweden. The town itself has about 500 inhabitants; with a total of 1100+ if you count the outlying surrounding municipality. There has been a settlement in this area for many 100s of years, and it was considered one of the "central points" for community connection in Jämtland county. Later, it became a stopping point for the railway, as well a ferry landing for boats on nearby Storsjön which is Sweden's 5th largest lake. The nearest major population center is Östersund, some 25 miles to the north.

Local lore suggests that the name Hackås is derived from the word "haknas," which is believed to actually be a misrecorded written entry in local records for the name "Hakuas," as the place was locally called in the early 1300s. "Hakuas" was most likely a compound word formed by the words "hake" (meaning a "point," as in, the point into the lake) and "ås" (meaning a ridge, or shallow mountain range). So, it could be said that the town's name was the result of poor penmanship, almost 700 years ago!

Hackås is best known for its very unusual and richly ornamented church, dating back to the 1100s-- along with the nearby belltower built in 1750. Although the church was rebuilt and expanded later, the structure still includes part of the original church, the altar, and frescoes dating to the 1200s. There are also a number of well-preserved paintings from the 1600s.

The church is located near the shore of the lake, a little bit away from the village, which is set back about 500 meters from the water's edge.