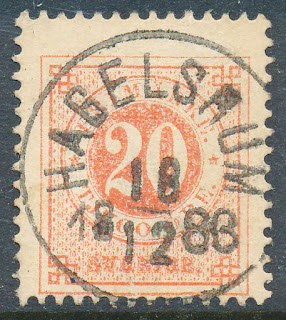 Pictured here is a copy of Sweden Facit nr. 33, 20 öre bright red Ringtyp perf 13, with an attractive "HAGELSRUM 18.12.1883" town cancel. It looks a bit like the cancel is from 1888, but the line at left is stray cancel ink-- when viewed from the back, you can clearly see the "3" of the date stamp. This is a nice example of the "normalcancellation 16," widely in use in Sweden during the latter part of the 1800s.

What is the value of this stamp? This is Facit 33e, the orange-red shade on "soft" paper, which has a catalogue value of 11:- Swedish Kr. The slightly yellowish shade of the stamp is normal on the soft paper printings-- the paper was typically slightly "cream" colored. The Hagelsrum cancel is a difficult one for cancel collectors to find, and this is a very nice example. Readable cancels from this postal place carry a premium value of 100:- Swedish Kr. and up. Given the quality of the cancel on a fault-free (although a bit off-center) stamp and the scarcity of the place, I'd estimate this stamp would sell for about 200:- to 250:- Swedish Kr. (US $31.50-39.50) at auction, perhaps higher if you were to buy it from a specialist dealer.

A bit about the place this stamp was postmarked: Hagelsrum is located just outside the small town of Målilla in Kalmar county in southeastern Sweden. Strictly speaking, it cannot even be characterized as a village; it is more like a "manor" with associated buildings, and a very small iron smeltery. However, it was-- in the 1800s-- significant enough to warrant its own postal collection point, most likely due to the commercial activity from the iron ore mill.

Local accounts suggest that the first settlements here were by Viking chieftains who'd "rest" in the area between long trips overseas. The first written accounts referring to the manor at Hagelsrum date to 1320, when the farming was most likely in care of a monastery based in the city of Vadstena. There were at the time three farms, a grain mill and an eel fishery in the vicinity.

Between 1447 and 1748, the property changed hands a number of times, was periodically claimed by the Swedish crown, and was burned down/ destroyed and rebuilt several times. There may have been a small castle built during one reconstruction, but this is uncertain as there are no remains found, today. For a while, the buildings were used for a munitions works; the iron smelter oven (basically a "blast furnace")-- which remains largely intact today-- was built from the ground up in 1853, and was in operation till 1877. The furnace is the only one of its kind in Kalmar county to remain well-preserved.

The postal station at Hagelsrum was active from December 1877 until January 1963. Today, mail from the area is processed at nearby Målilla. The current population of Hagelsrum is about 30 people.
Posted by Peter M at 16:56 No comments: