As most stamp collectors know, eBay is a giant mish-mash of stuff... from absolute rubbish to incredibly overpriced classics. 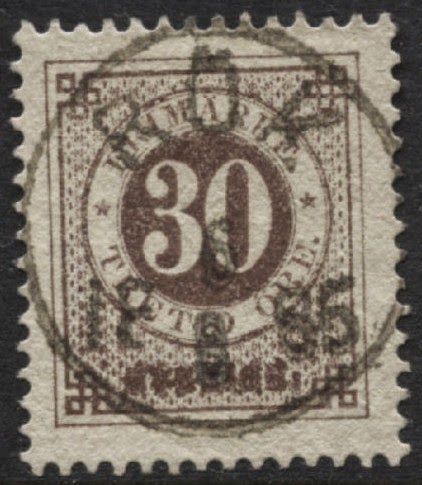 That said, you do occasionally come across a "gold nugget" or two. Earlier today, I came across a little "gem" that is perfectly representative of what Swedish town cancel collectors strive to find for their collections.

I know it's certainly the kind of stamp I like to add to my own cancel collection, but you rarely find one like this: It is not only a well-centered stamp without faults (Sweden no. 36, 30 öre ringtyp perf 13), it has a perfectly struck upright cancel.

Although not enormously rare, RÖK is a smaller place and by no means common.

I have seen these types of cancels-- in this quality-- sell at major auction houses in Europe for 100 € or more, so it is interesting to see one like this show up on eBay.

No, it's not mine... the seller is actually in Sweden, and the stamp is open for bids till Sunday, August 31st. This particular seller actually has several nice Swedish cancels up for sale at the moment. Here's a link, if you'd like to go have a look!
Posted by Peter M at 20:42 No comments:

Recently, I have been continuing to sort through a very large accumulation of the Danish "Bicolour" stamps, generally issued between 1870 and 1903. 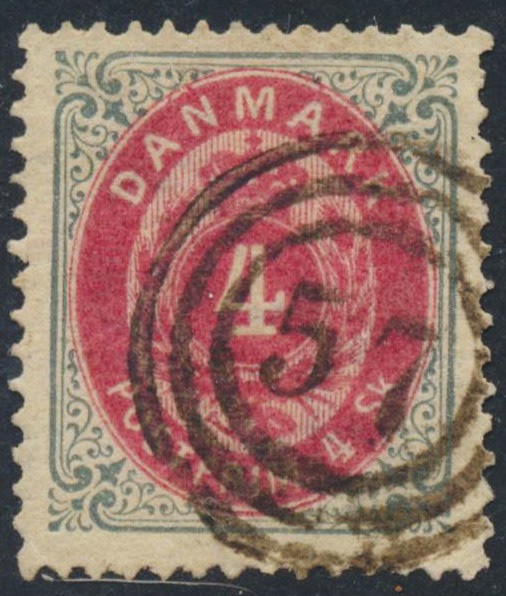 I have long been a keen collector of postmarks and cancels, and these were really first way I started expanding my Denmark collection, back in the early 1980's. I would come across a particularly nice cancel, and add it in the margins of my album, even if I already "had" that stamp.

Most of the "early" versions-- skilling issues and the first printings of the øre issues-- of Bicoloured stamps were found with numeral cancels. Although some were "uncommon," it was not all that difficult to form a collection of many post offices (in general, there was one number assigned per place), if you have a large enough batch of stamps to look through.

Generally, all I could afford in the early collecting days were 4 øre and 8 øre stamps, so those were my initial "targets," to find numeral cancels.

Of course, there is a huge difference between finding merely a "readable" and a "lux" quality example. I soon learned that "luxury" quality cancels-- even on common stamps-- can sometimes sell at huge premiums. Reminds me of one of my father's sayings, from when I was a little kid: "Top quality is never out of style." He was certainly right about that.

In the process of looking for nice numeral cancels, I started noticing some of the other post marks on these issues. My concurrent interest in Swedish town cancels ("ortstämplar") soon enough spread to Denmark. 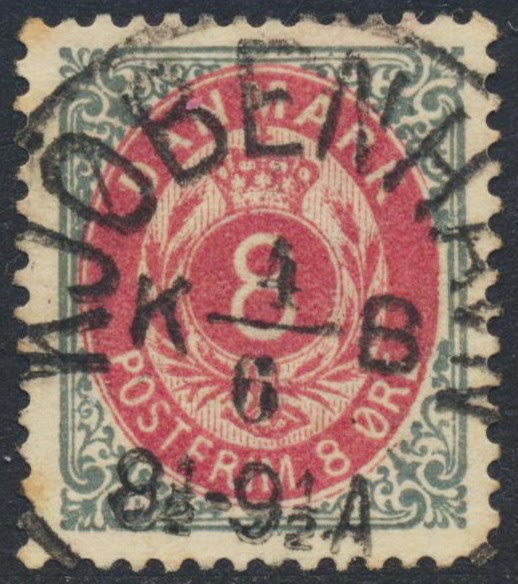 Early Danish town cancels "fit nicely" on a stamp, just like their Swedish counterparts-- and I soon enough started adding particularly nice examples to my collection.

It only made sense to me, as numeral cancels started to become discontinued, I wanted to add the postal markings from "later printings" to my collection, as part of the ongoing specialization.

A number of different styles were used, which made for almost infinite possibilties! Different diameters, different lettering styles... and now that cancels were no longer limited to "just a number," there were also individual post offices that could be distinguished within one city.

In addition, there were also railway (RPO) cancels.

For a while, "collecting cancels" became my "major obsession" with my Denmark collection-- in part due to the fact that I had reached a point where "filling the next empty space" was getting to be a rather expensive proposition. I think it's a point many collectors reach, as their collections approach "completeness," and it often acts as a catalyst to push someone into specialization of one form or another.

For me, the $200 (or equivalent) I would need to buy the next "main number" could instead allow me to buy thousands of inexpensive stamps in duplicate lots and accumulations, which I could then sift through in search of postmarks (and later plate flaws). 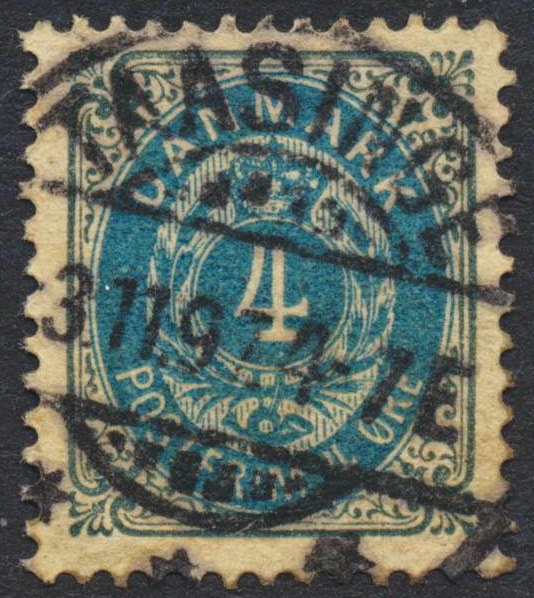 As the "evolution" of the Bicoloured issue moved along to the 1895 and beyond "coarse perforated" issues, the most commonly used cancels changed again to the "brotype" type cancel... which remained in use (in one variation or another) for a century.

These were the most difficult to find in "lux" condition (meaning a full upright, well-centered and clear strike of the cancel)-- seemed like postal employees had become less concerned with applying cancels "fully" to stamps... as long as the stamp received "some" cancel ink, it was evidently considered "good enough."

Hence, my nice cancels on coarse perforated Bicolours remain limited, even after some 30+ years of looking for them.

Last-- but certainly not least-- many variations of Denmark's possibly most "famous" cancel type were used on the Bicoloured issues: These are the "star" cancels, or "stjernestempler," as they are known in Denmark.

These were mostly used at rural "postal collection places," and were essentially a "temporary" postal marking applied before picked up mail was taken to the main post office. Star cancels are highly collectible, and a specialty, in their own right. Which presents one of the dilemmas often facing cancel collectors: Do you collect a particular type of cancel and try to find all stamps on which this type was used? Or do you collect a particular stamp issue, and only care about cancels on that issue?

Fortunately, there is no "right" or wrong way to collect stamps-- and I often find myself doing "some of each."
Posted by Peter M at 10:56 No comments: